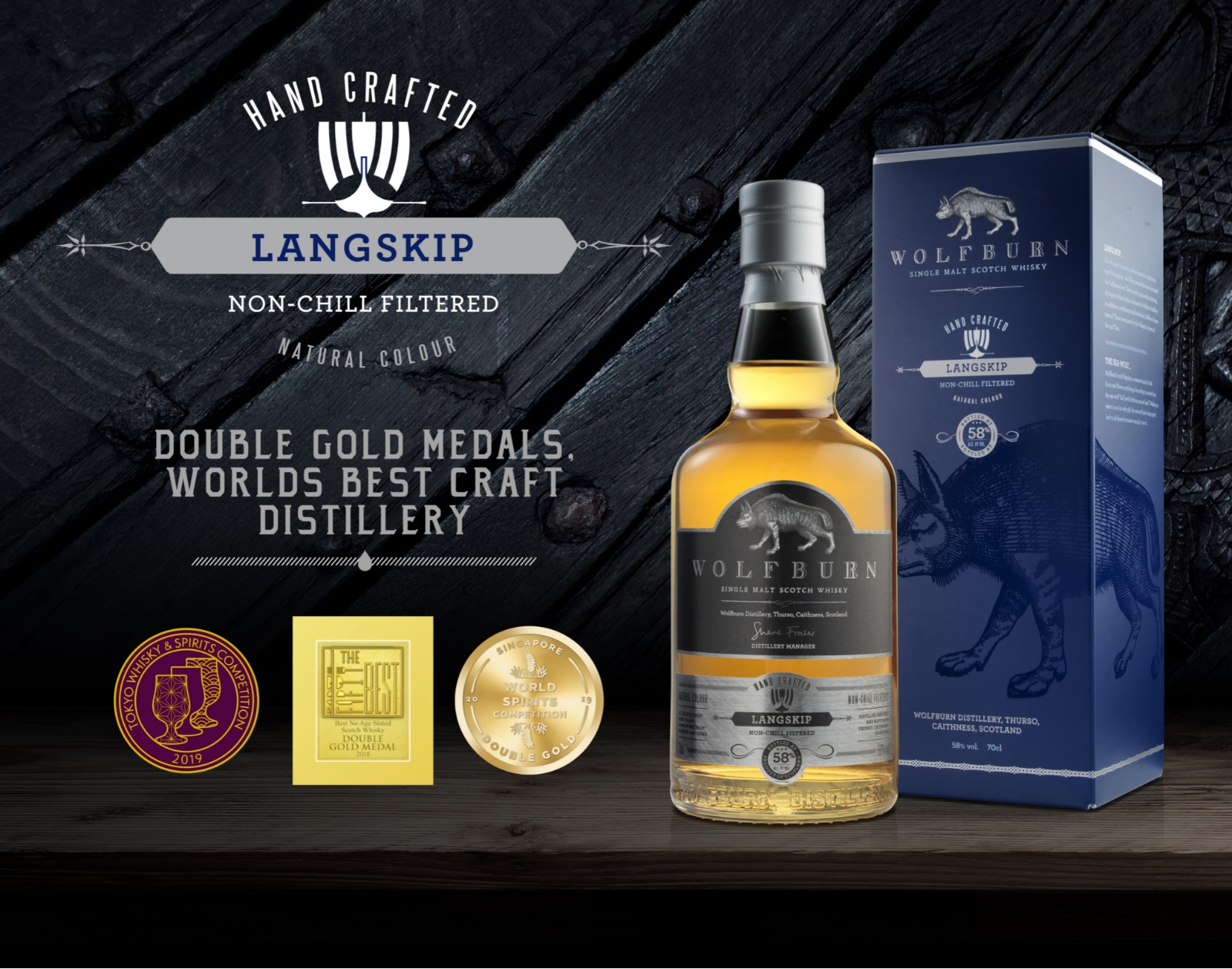 Wolfburn Whisky’s Langskip has taken a double gold win at the inaugural Singapore World Spirits Competition held at The Excise Man from June 3 to 6, 2019. Langskip surpassed whiskies in 29 categories to be voted Best in Show and Best Scotch. It is the second double gold since Langskip release with the expression also being awarded at the 2018 Fifty Best awards in the US.
Recently awarded Best Scotch Craft Distillery in the World by the Tokyo Whisky and Spirits Masters, Wolfburn is the most Northerly Scotch distillery on mainland Scotland located in Thurso, Caithness. The original distillery closed in the 1850s and the modern, purpose-built Wolfburn began production in 2012 near the site of the old one, using the water from the same Wolf Burn to make their whisky.
“Our hand crafted whisky is made, matured and bottled on-site by a small but dedicated team of distillers who hail from the Thurso area. We’re incredibly proud of the way Wolfburn is made using the traditional methods which translates into a truly special scotch,” says Mark Westmorland, Global Brand Ambassador.
The first of Wolfburn’s four core expressions, Northland, was released on January 25, 2016. Within it’s first year of release it had won a gold medals with the Hong Kong IWSC, double gold US fiftyy-best and another gold at the World Whisky Awards.
Aurora, named for the Aurora Borealis which can be seen from the distillery, was released in the summer of 2016. Aurora is a blend of the Wolfburn spirit rested in both American bourbon and Oloroso sherry casks and was reared at 92% at the Concours International De Lyon in the Single Malt Scotch Whisky section.
Morven is the lightly peated Wolfburn Whisky that will convert most non-peated whisky drinkers and satisfy the already converted. On the nose of the peat is apparent through the characteristic Wolfburn floral notes but does not overpower the flavour of the whisky on the palate. It’s little wonder that this well-balanced Scotch also garnered itself a gold medal at the 2018 US Fifty Best awards.
Released in October 2018, Langskip, is presented at 58% ABV. Named for the Longships that carried the Norsemen from what is now Scandinavia to Scotland, Langskip does its Viking roots proud. “We know there is a growing market for near cask strength Scotch and Langskip is proving it to be true. It’s fast becoming one of the most popular of the range,” according to Iain Kerr, Distillery Manager.
Wolfburn’s limited edition releases such as the Small Batch series come from special casks acquired from their coopers and often sell out before they are officially released. Likewise with their Kylver series which are named after the ancient runes found in the region, again harking back to the Viking influence in the area.
Wolfburn is currently available in 30 countries worldwide and is imported and distributed in Singapore by Distilled LLP.